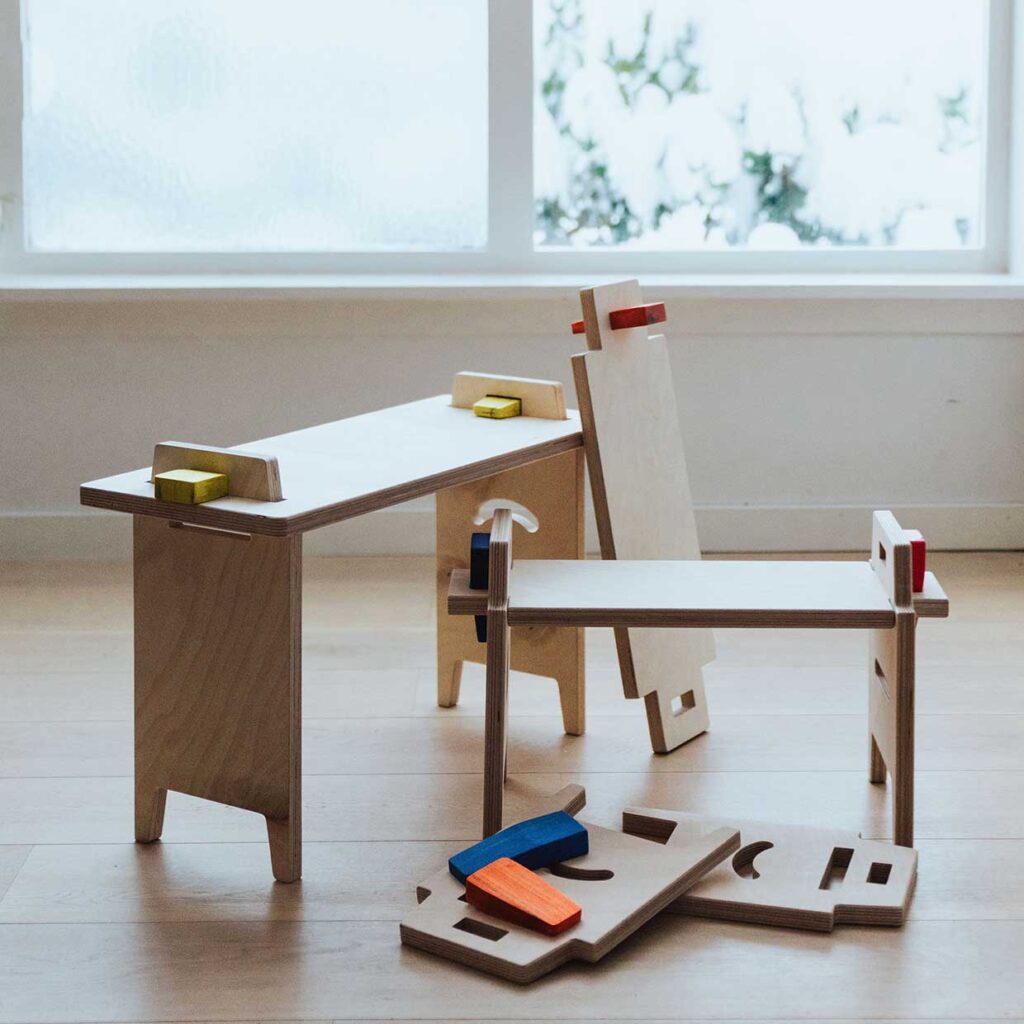 Taran – can you elaborate why you developed your play furniture Kile?

KILE (which translates to both “wedge” and “tickle” in Norwegian) was inspired by an observation that children are constantly being underestimated. A lot of toys are built with so many fail-safe mechanisms that the children can’t mess up. Or they are too linear, and there is a clear goal or finish line.

KILE is a play furniture that has at least 4 set furniture functions, which means that they can be a part of the furnishing solution in the children’s bedroom. But it can also be turned into whatever the children think of through play. The little wedges can become characters of their own, or the bench becomes a donkey! Turn it upside down, and you have a boat with handles to hold onto.

The abstract faces on the sidepieces came about when I was testing the modules, and suddenly noticed that the profile was like a little character and the wedge was its nose. I went back and forth, but I decided on only cutting in a mouth, as to not make it too obvious and still leaving some things up to the imagination. And the cutouts double as a handle if you need to put things back in their place. 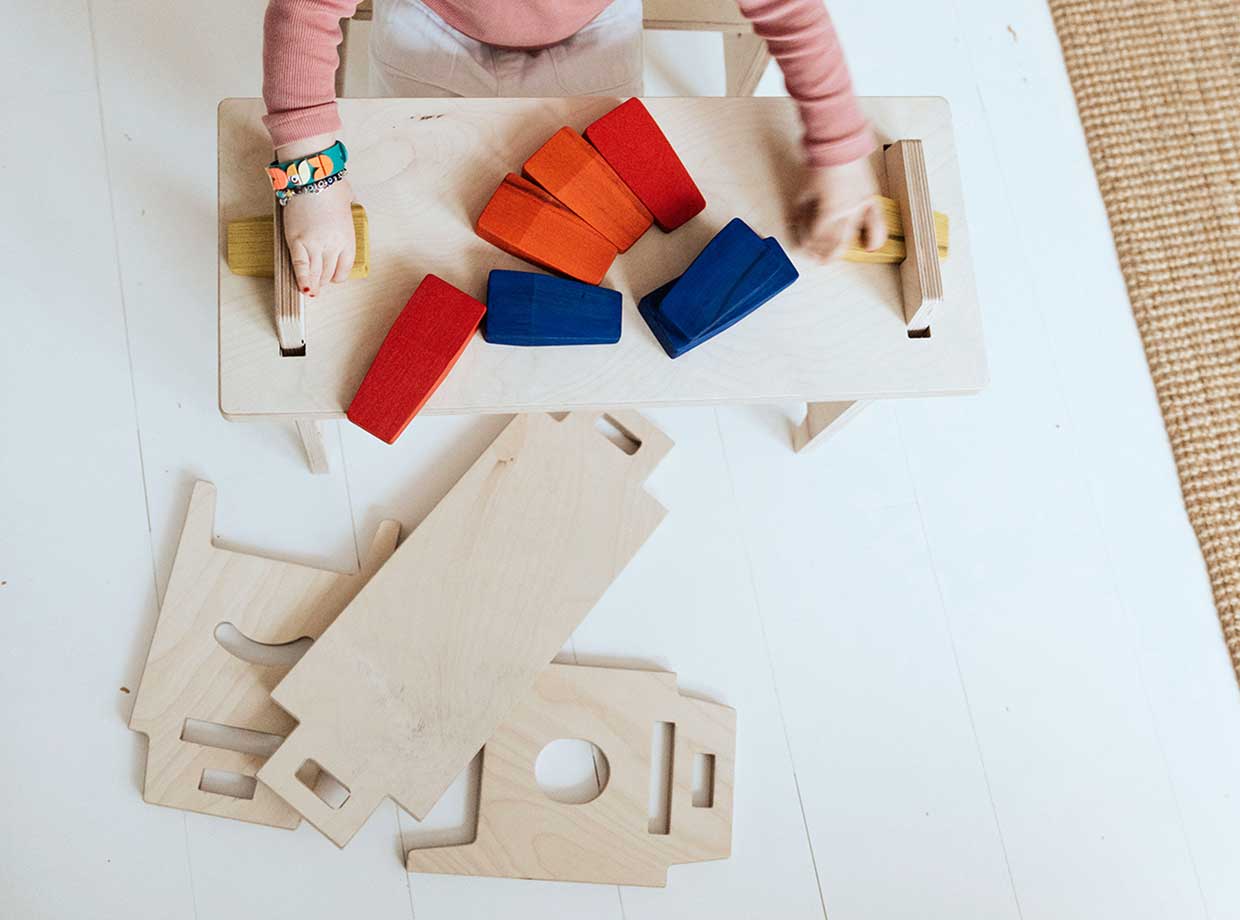 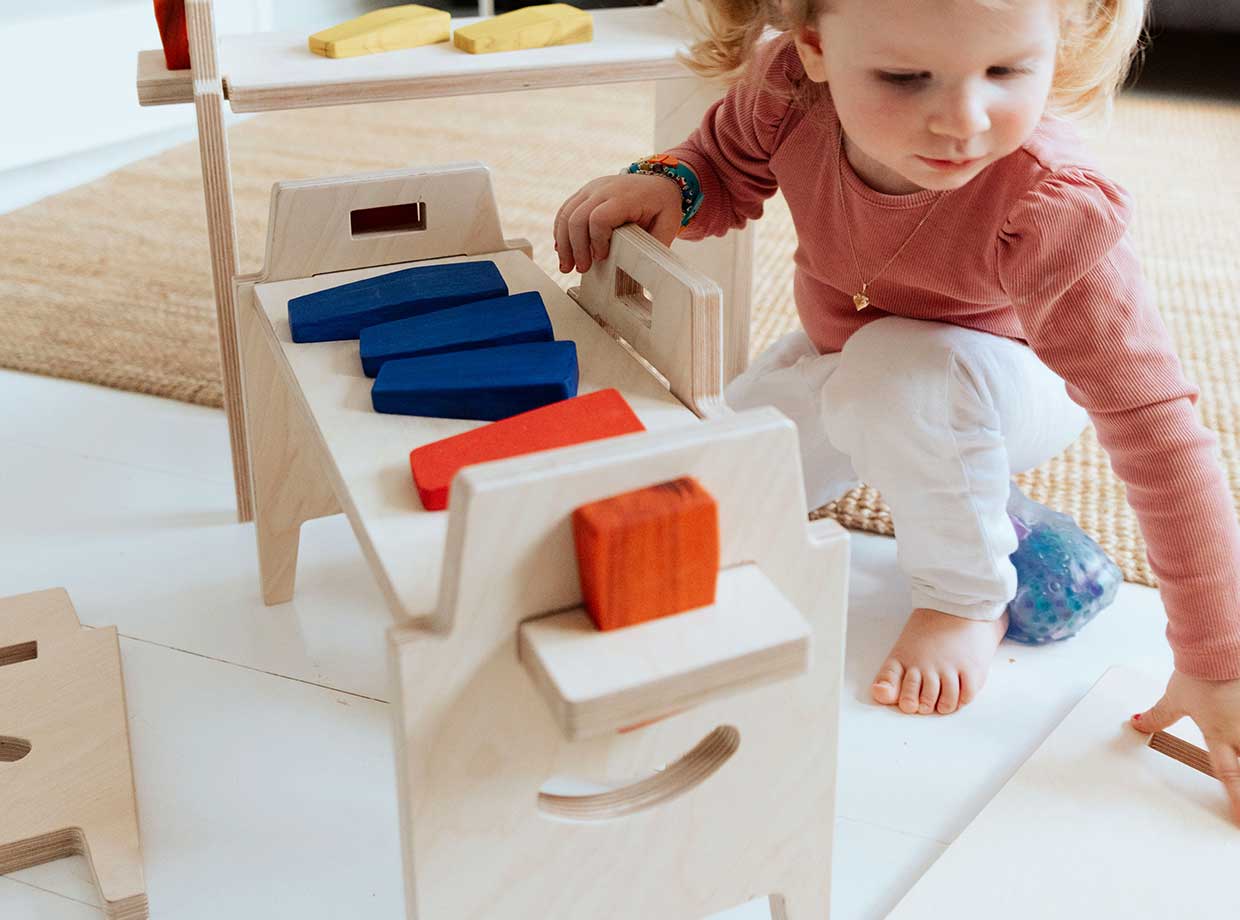 Have children been able already to play with your play furniture? If so, how did they react?

The girl you can see in the photographs was very fascinated by the play furniture. As children always do, she would put the pieces together in ways I hadn’t thought of. Upside down, sideways, stacked and crisscrossed. To her, it didn’t have to be a stool or a shelf – it was a car, or a boat. She was amused by the characters that were formed, and was very interested in the wedges themselves. She collected them and also played with them on their own. I was a little worried about the dimensions of the larger pieces, but she seemed to handle them well. 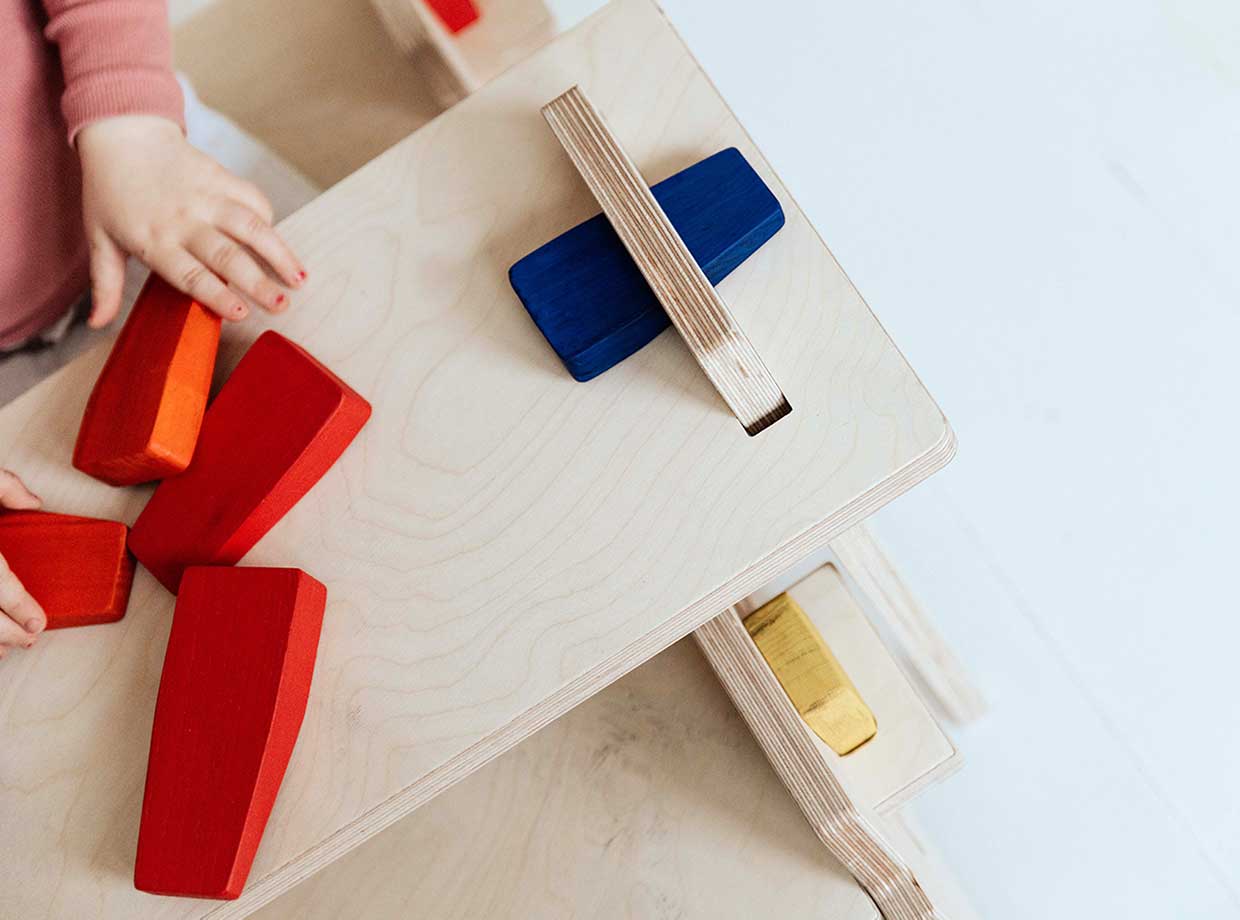 Now, Kile is still a prototype, but what are your plans for it?

I am planning to contact different manufacturers who could be a good fit, and I hope to exhibit it in the near future. And I want to make a few more sets to gift to friends with children, and then gather more feedback to develop it further. 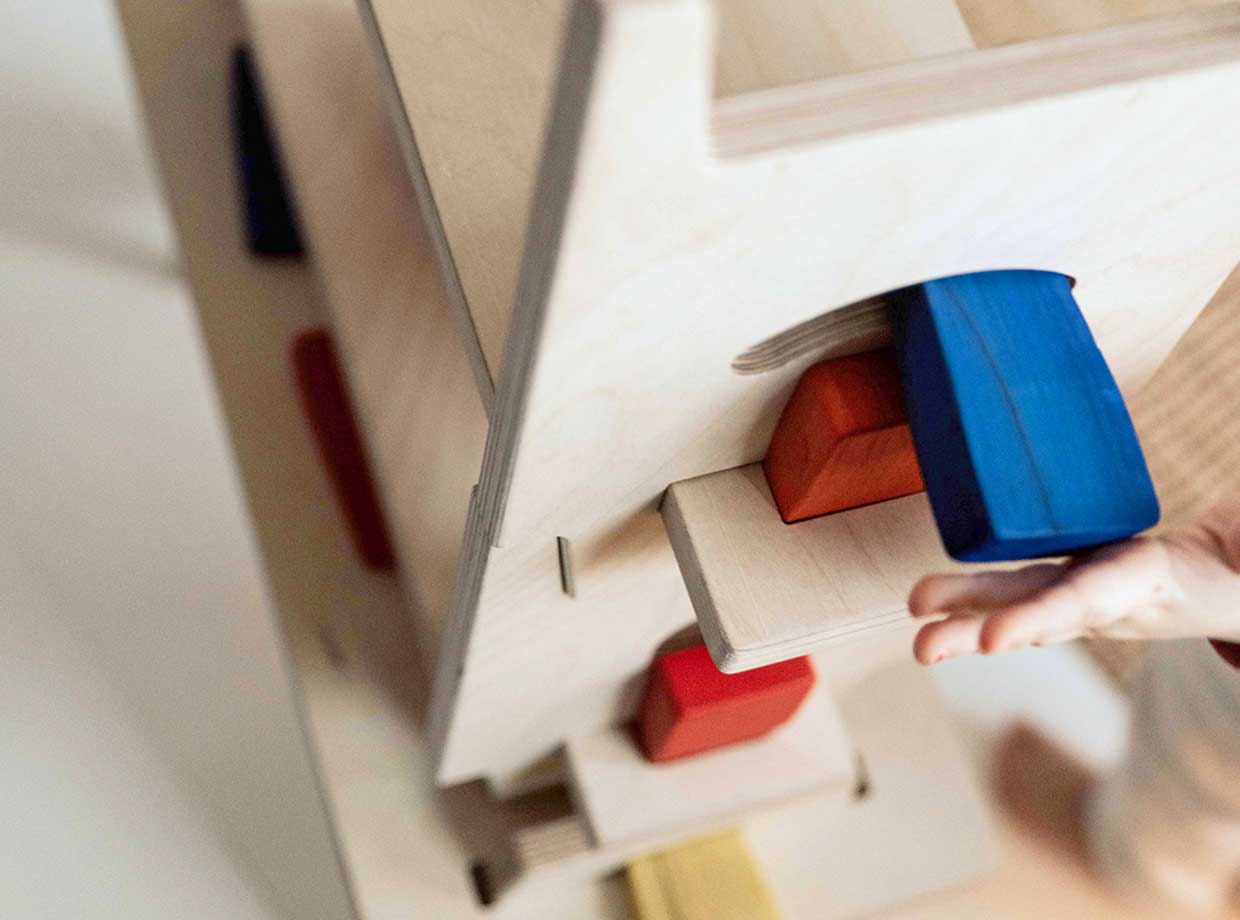 Taran – Are there other products that you designed specifically for children?

My bachelor’s thesis was centred around children as next of kin in hospital environments. Children that are spending large amounts of time at the hospital because one of their family members is sick. The result was a building set inspired by the existing hospital environment.

It is meant to act as a bridge between the children and the very foreign, medical atmosphere. Partly, it was a literal translation of the forms in the existing environment. I noticed that a lot of other attempts to make places for children at the hospital were so colourful and contrasting to the environment it was set in, that it simply exaggerated the notion of the children as an afterthought. In addition, they seem to try to hide the hospital atmosphere, rather than letting the children get to know it.

The building set is also designed to be stored and used in the patient room, which means that the children can play in the patient room, and not be exiled to a play room way down the hall. They can spend time with the patient, while also having their own agency and learn about the hospital environment.

A few personal questions at the end:
What toys did you play with as a child? Did you have a favorite toy?

I grew up with Fisher-Price. I also loved Legos and Playmobile, anything were I could affect the storyline. But a toy that sticks out to me is Kapla. It’s amazing what thin rectangular pieces of wood can become with a little imagination in the mix.

If you were to look into a crystal ball and predict your future as a designer, Taran: What children’s product would you like to design next?

I am going to be an aunt in the fall, so right now I am working on a bedside mobile. I can’t wait, and I am very excited to have someone to test my prototypes with! 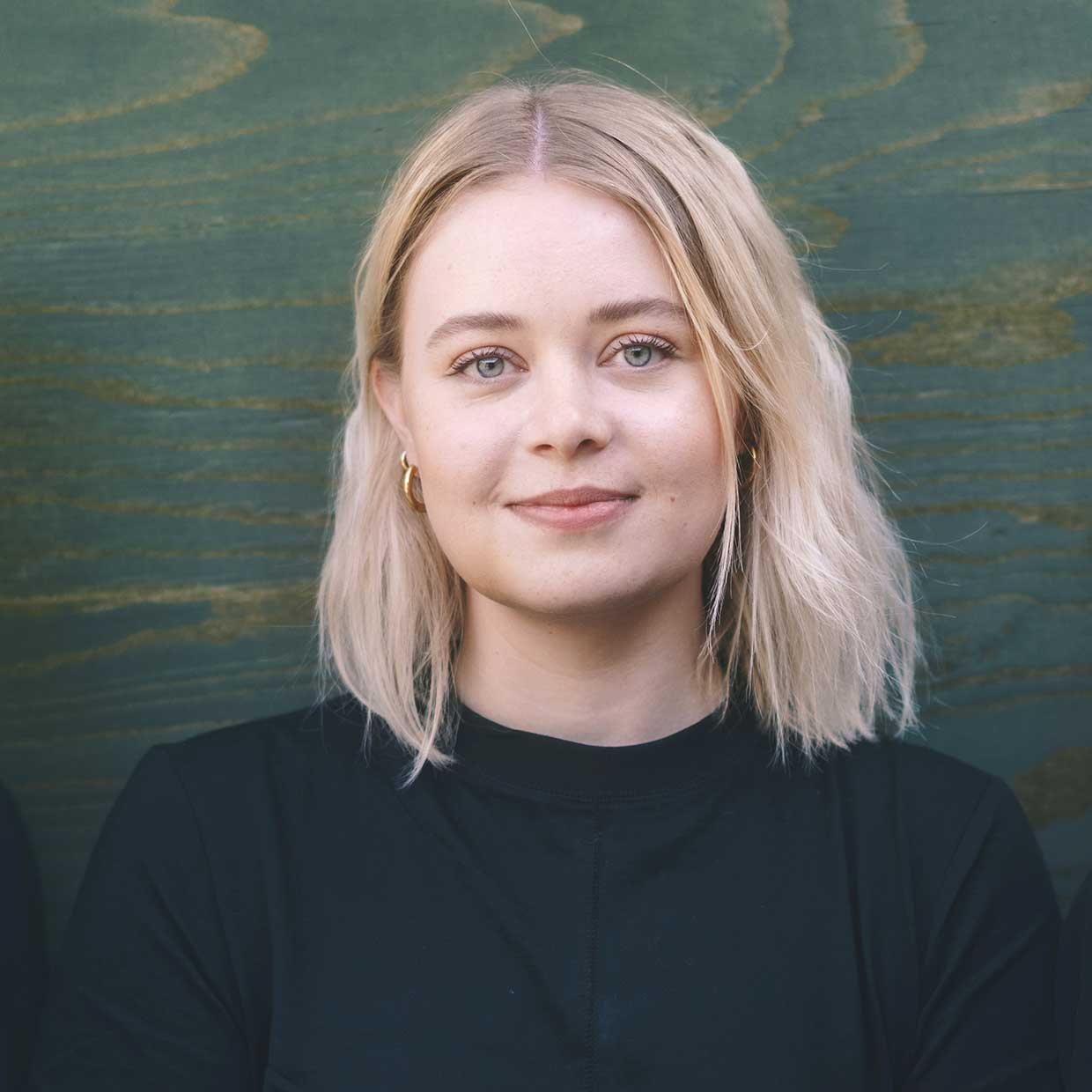 Get in touch with Taran Johanne Neckelmann via E-Mail:
moc.liamg@ennahoj.narat