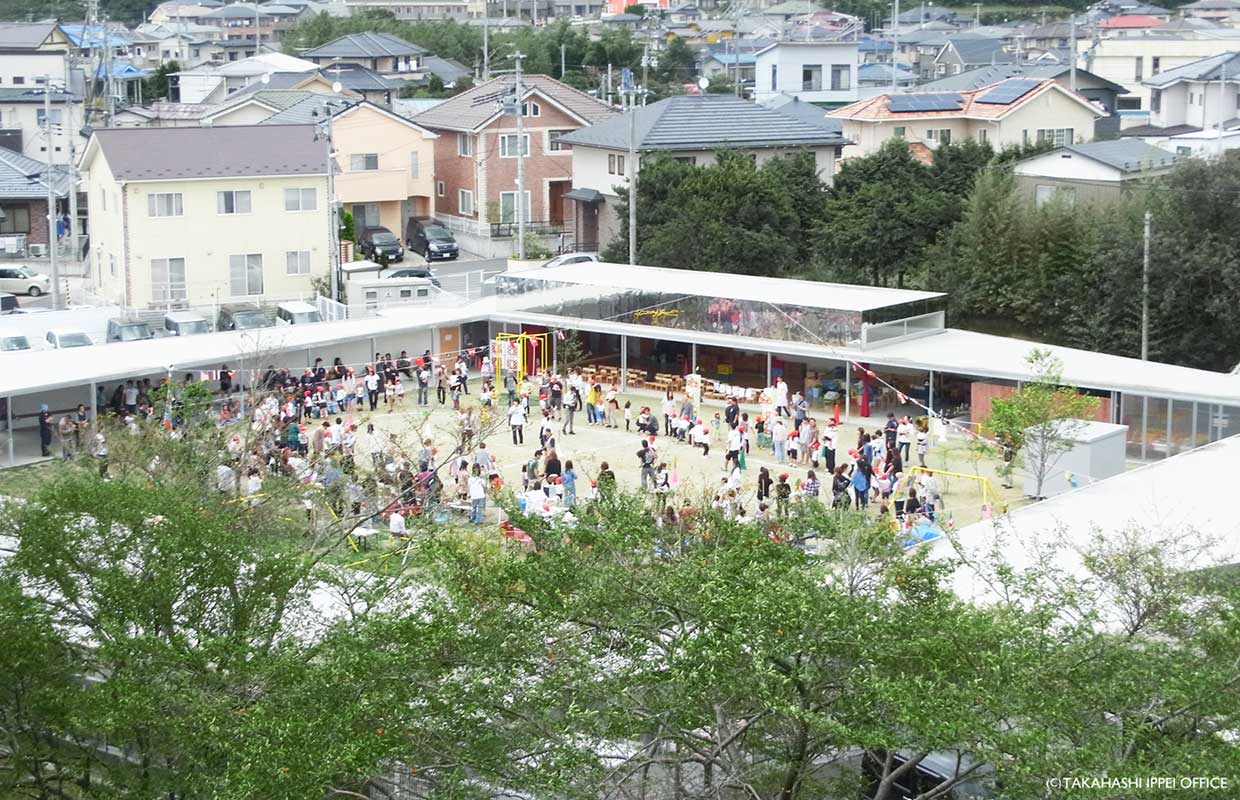 The nursery is located near the ocean that makes the school environment a little bit unconventional. What else is unique about this project?

Many things.  At first, it started from a competition for the design. The planner Mr. Yasuaki Onoda suggested that proposals be accepted from the public in his role as restoration adviser to Shichigahama, and following a two-stage survey, I was ultimately chosen to oversee the design in November 2011. This was the first project to be implemented in this town. 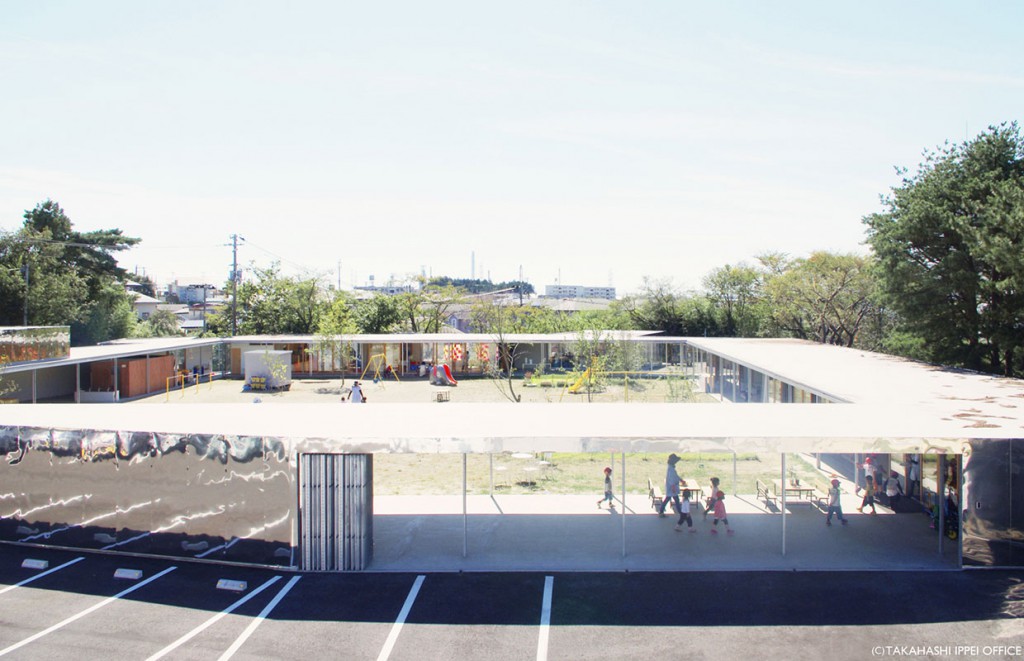 We therefore wanted the new building to be in harmony with its surrounding environment and not to disturb its atmosphere. At the same time, we also wanted the rebuilt nursery to be a monument for reconstruction and to have a grand presence, evoking both unity and eternity. In order to achieve these objectives, we decided to keep the height of the building low, rendering its structure horizontal. As a result, the nursery has a modest appearance, with a low ceiling and a large courtyard which does not feel claustrophobic. Furthermore, the new construction assimilates the outside nature into the courtyard, with a number of semi-outdoor spaces which face the courtyard connect the building with its external environment. The thought behind this construction is similar to that of ancient monuments in ruins. 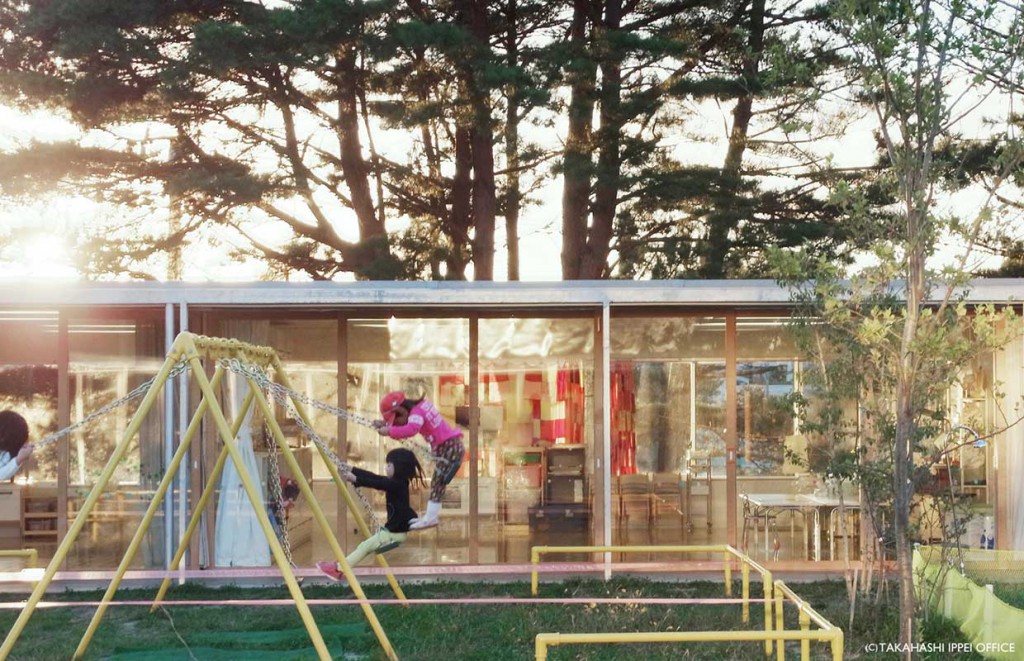 In other words, this building is not a normal nursery: it is an environment where children and adults can spend time in the fields. The fact that the nursery provides this kind of environment makes it feel liberated and unconventional. The nursery has a community lounge where town people can enter and communicate. Also it is open to public when any events are held here.

While working at this project did you install the requests of the people living in the neighboring area, parents and teachers?

The premise of the design proposal was one that invoked participation, in which the town’s people and the architect work together towards achieving a major goal. Anyone wanted the rebuilt nursery to be a monument for reconstruction. At the competition stage, I proposed a planning system which organizes all the integrant parts methodologically. 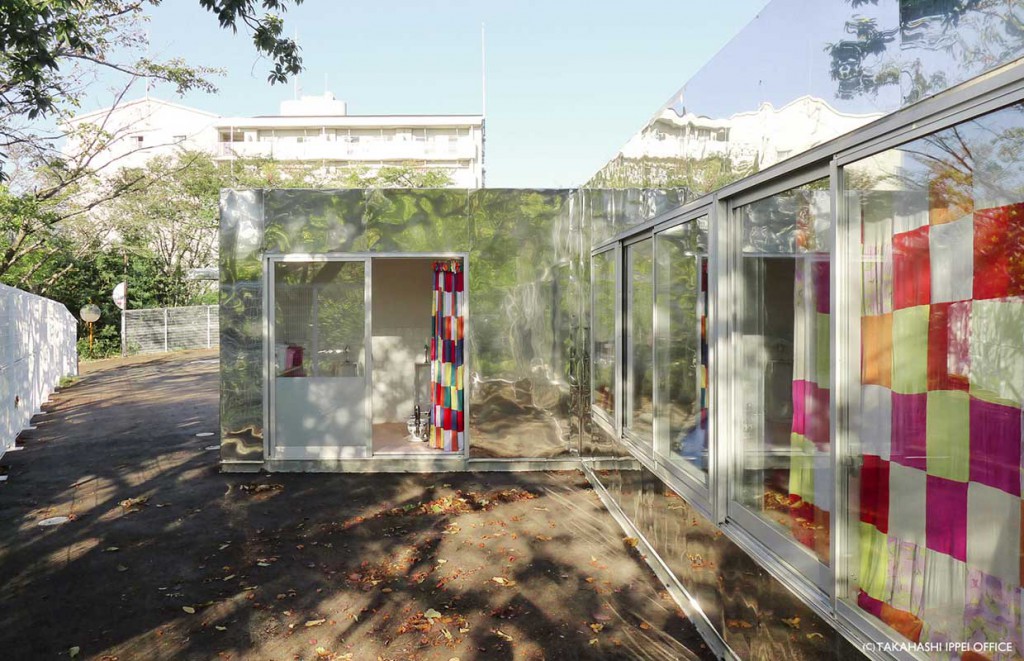 That could be apparent in both the irregularity of the outer perimeter as an expression of the multiplicity of the context and of the population’s desires, and the permanence of the strongly squared courtyard in the center. In fact, the outer part was designed with a number of conversations with people living in the neighboring area in mind. In other words, we did not install their requests regarding the nursery in the black box building. Instead, we directly arranged them in the fields surrounding the courtyard in a circle in order to help viewers visualize the process of construction. It helps maintain a shared environment in which anyone can use as if it were their own home or a village. It is because this manner in which architecture is gradually created, is the most natural. (For example, at the side of the lounge would be a corner where the elderly from the neighborhood and children could read picture books, the cafeteria kitchen would be separated from the ring as it could be dangerous in an emergency situation like a fire, with a high ceiling created for the hall, and so on.) What greatly assisted this situation was the fact that this nursery was a single-story building. There were times when a new proposal was brought in, where a portion of the diagram was cut using scissors and affixed at a different position with tape. This way, the large square courtyard and assemblage of various size rooms that were created as a result, is itself a story of how people come together to create architecture, and should appear as a distinct characteristic of this building. 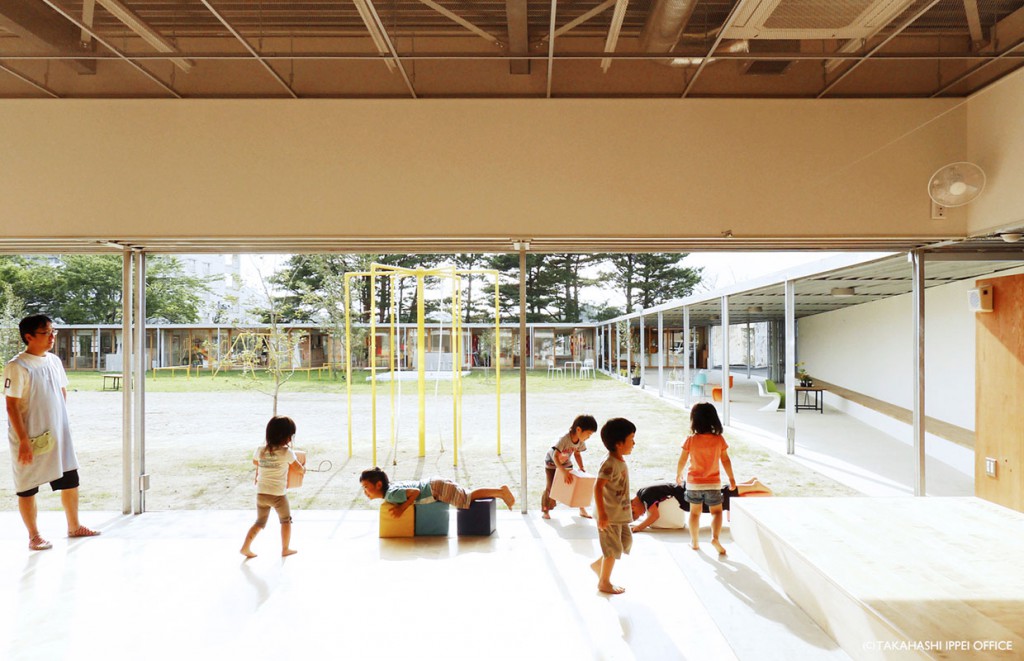 Furthermore, another reason I decided to try this system was the speed. The mayor of the town demanded greater speed for reconstruction. That was about twice that of the norm. I could easily imagine that I had to go on updating and execute planning as speedily as possible according to their requests, whether I also liked it or not, in moral implication under reconstruction activities. But also I had to make and keep the “gestalt quality” or a certain symbolism of the architecture, because the populations entreated me to produce an eternity or a symbol such as a prayer for the reconstruction. One of the problems I noticed at that time was the sprawl. It occurs when many desires have rush on the discussion table. There is no choice, but I have to control them with something of cosmos. 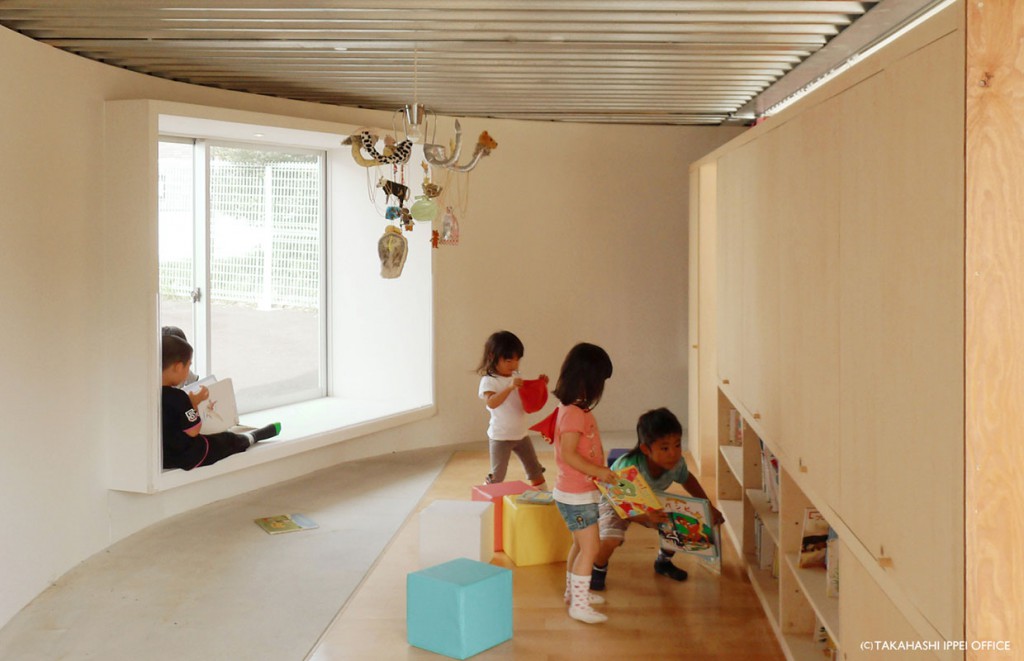 For that reason I proposed the system with the squared courtyard at first, and then directly arranged anything they required in the fields. But more desires and unexpected requests can be welcomed for me by this system, because they make various types of spaces in planning and we can enjoy the irregularity as the architectural experience. I found a gestalt quality and the abstractness finally after I kept the height of the building low so that people in the courtyard could feel both a sense of belonging to the community and a sense of open to outside environment. At a result the architecture becomes both open and symbolic as if it was an ancient monument in ruins.

Any advice how others can develop a creative learning environment in schools?

We never forget thinking of something unconventional.

After the project was done have you visited your project place to see how the children appropriate the space in unique ways?

Of course. Many surprises. I attached two photos in recent days. One is when the festival was held, the other is last summer. 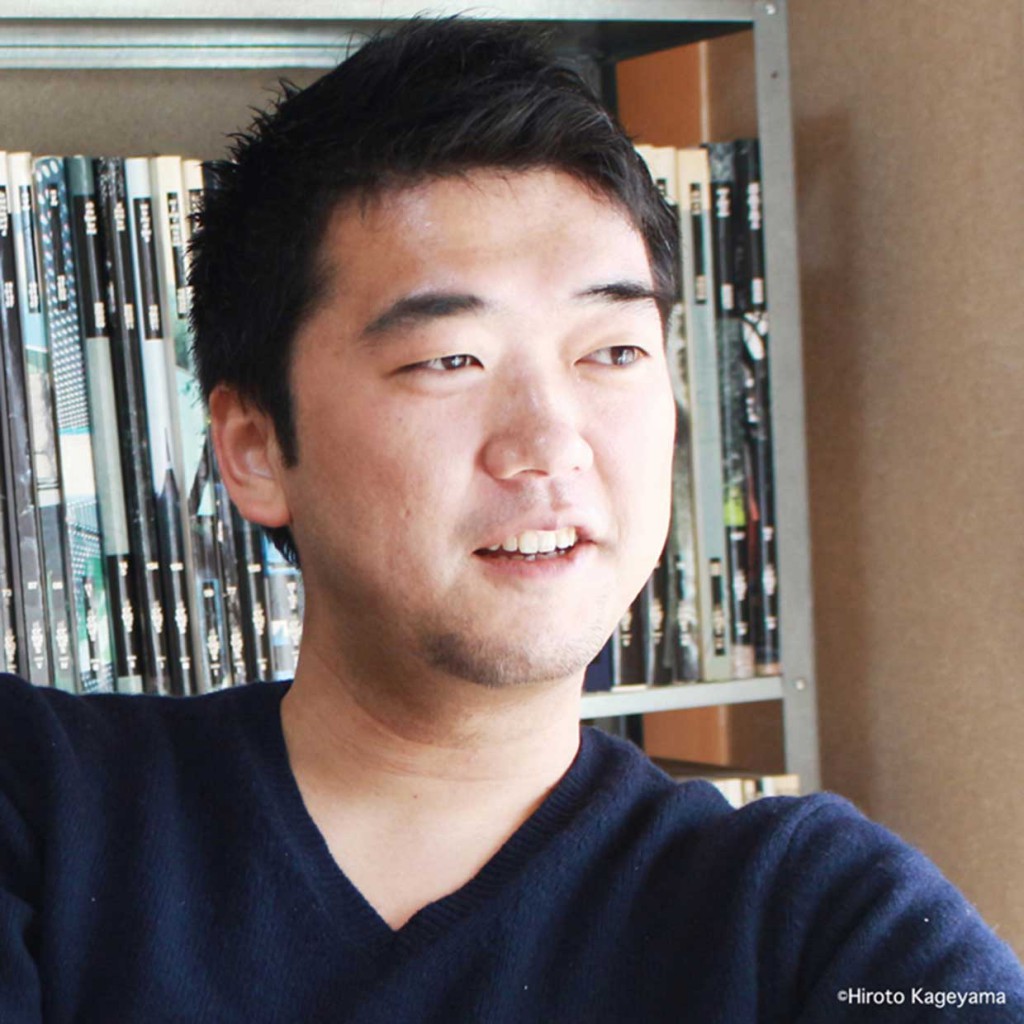 What are you doing in your work to give form to such an essential, controversial theme in contemporary architecture?

To keep thinking purely and essentially for anything.