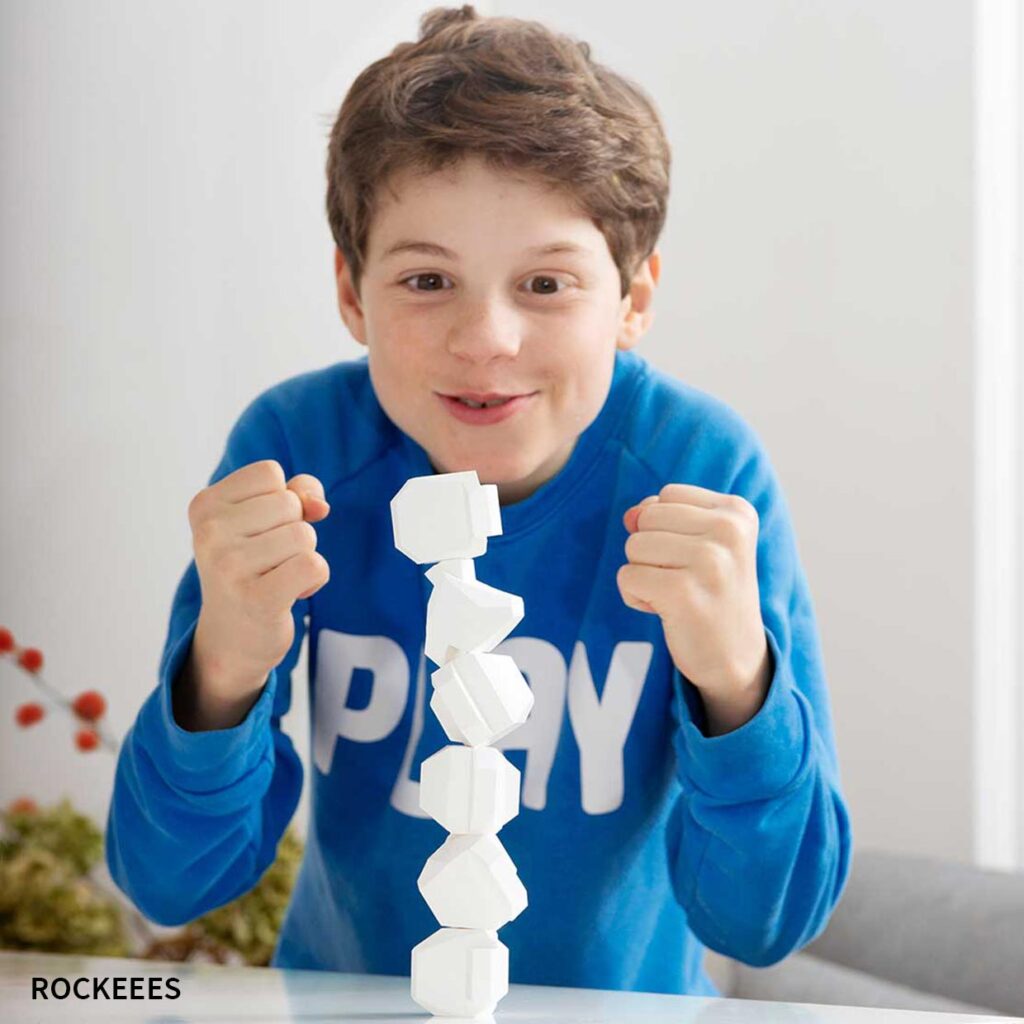 Changemakers in the toy industry promote fair production conditions, a responsible manufacturing process and handling of materials. In short: more sustainability in children’s rooms. Indeed, some of the changemakers are taking completely new approaches.

Whether plastic cars, wooden figures, or dolls: Much of what can be found in children’s rooms is unfortunately not at all suitable for kids. Many toys are still produced under poor working conditions, are loaded with harmful substances and thus destroying nature and livelihood.

It’s time to rethink: How and with which materials and attitudes children grow up influences their lives and actions as adults directly. These so-called “changemakers” in the toy industry are aware of this and with their products want to achieve that topics such as climate protection and sustainability are self-evident in the children’s room.

Before buying the next plastic toy, it might be worthwhile to take a look at the selected product’s country of origin. In many countries, toys are still produced under deplorable working conditions. In 2020, organizations like Solidar Suisse, China Labor Watch (CLW) und Christliche Initiative Romero (CIR) published an undercover investigation of four Chinese factories. Their findings: poor pay, lack of occupational safety, and even psychological violence against the workers.

On the other hand, toy changemakers act respectfully and responsibly: some produce as locally as possible, thus shortening transport routes, saving large amounts of CO2, and ensuring play fun without a guilty conscience.

Graduate designer Christian Lessing for example, manufactures Mauersteine, a stacking game for children and adults produced within a radius of 50 km from his home and place of work in Düsseldorf. Even the wood for the stacking bricks comes from the neighboring Sauerland region, and the finished toy is packaged from recycled cardboard in a forensic clinic for the mentally ill in Düsseldorf. 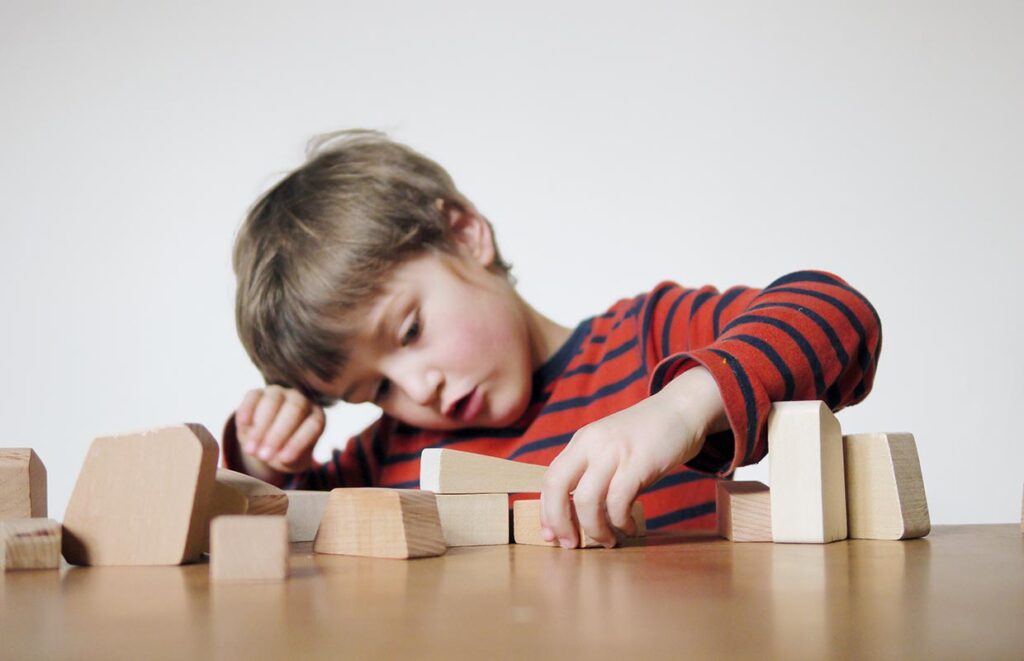 The Polish designer Agata Potiopa of JustBlocks obtains the wood for her blocks from sustainably managed forests a radius of maximum 100 km away from her home. The natural wooden blocks are then manufactured in a woodworking shop 80 km away and packaged in the family-owned workshop in Batowice. 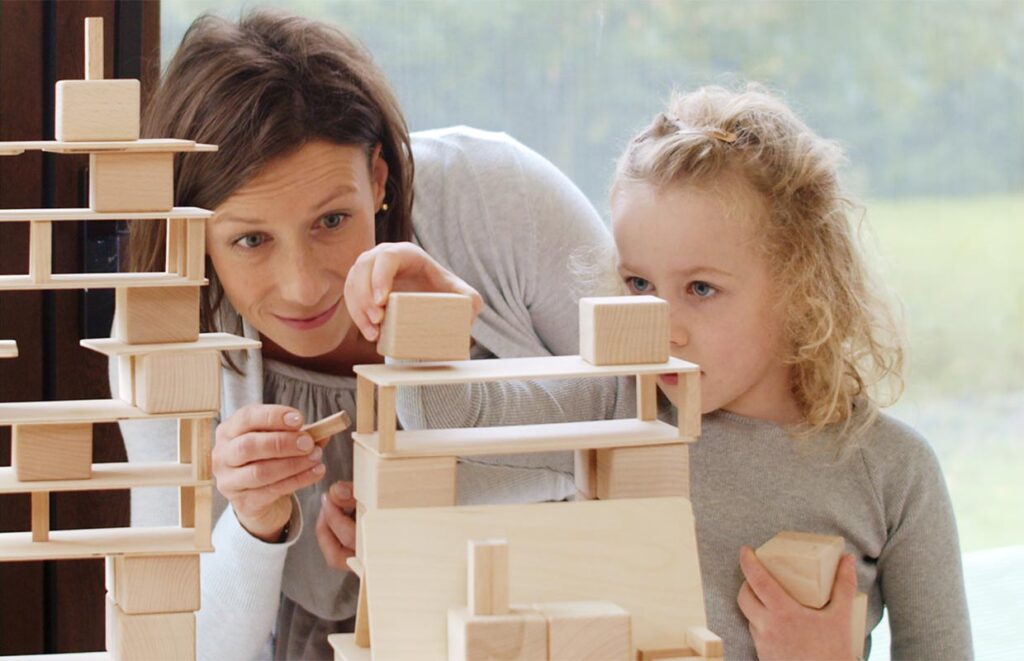 Pebble founder Samantha Morshed is taking a similar approach in Bangladesh. The country – and especially its capital Dhaka – is known for its cheaply produced textile goods. It’s mostly women who are forced to leave their families and villages and work in the factories for a pittance. Samantha Morshed wants to change this and brings the production of her crochet dolls to the rural villages. Here, workers can flexibly divide up their work, look after their children and are also paid above average. 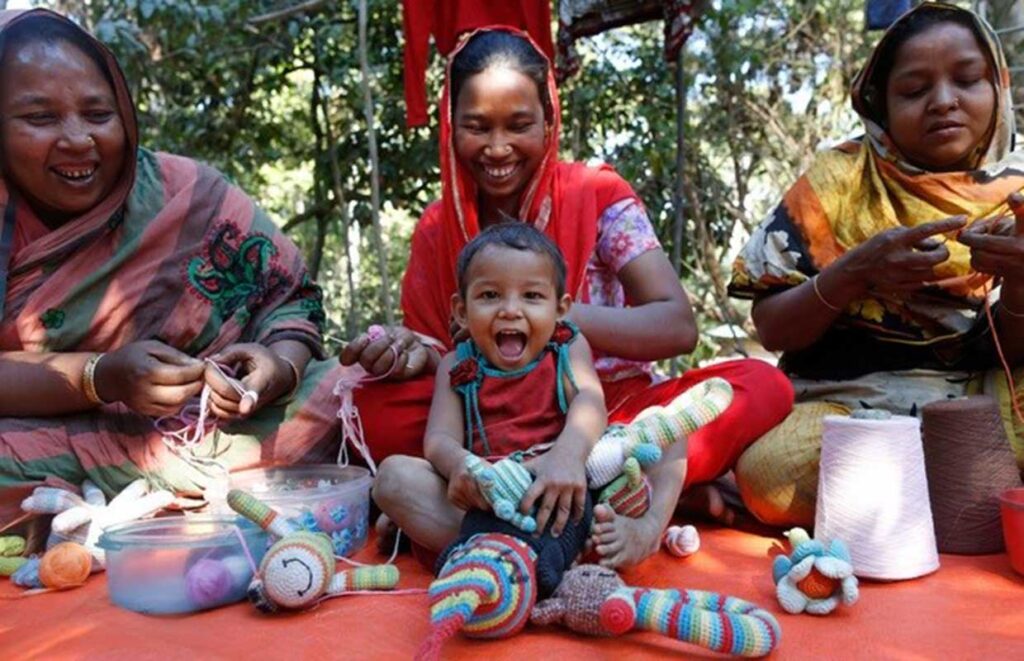 Eco-friendly toys made in Germany

Another important aspect that toy changemakers are increasingly addressing is the eco-balance of their products. The environment processes conventional plastic very slowly and – especially in children’s hands – is anything but sustainable and may even be dangerous for the little ones. Plastic often contains additives that are hazardous to health, such as naphthalene, which irritates the skin and respiratory tract. Or the hormonally active plasticizers accumulating indoors, as in house dust, and enter children’s bodies through the air they breathe.

And yet: “It appears that parents no longer pay as much attention to the material and sustainability to the toys with older children,” says Matthias Meister from TicToys in Leipzig, who with Tony Ramenda has made it his mission to produce toys with as minimal an ecological footprint as possible. Together, they specialize in motion toys that can be used by both older children and adults for many years. 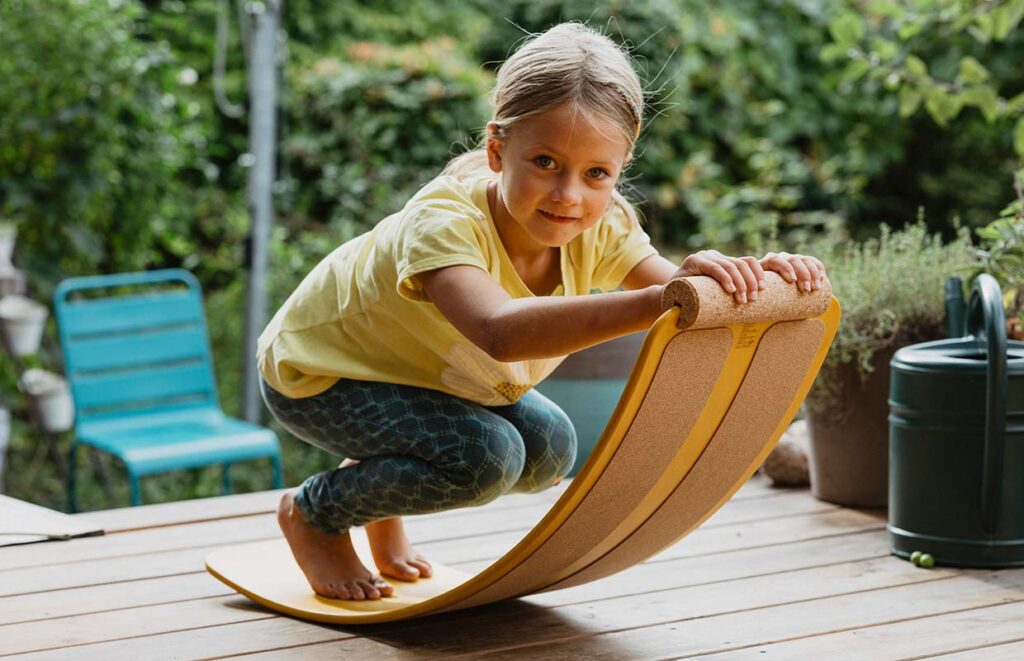 The problem here: “While close attention to material is still paid for babies and toddlers, this attention seems to be neglected over time. However, sustainability is a consistently important topic,” says Matthias Meister and adds: “We make products for children. And children are our future. You should always ask yourself what added value a toy will have in the long term.”

Toys in the cycle: toys made from recycled materials

Other independent toy manufacturers and designers have also committed themselves to the idea of sustainable toys and offer unusual alternatives for long-lasting toys. One particularly creative approach is the Rockeees stacking game by Jean-Pierre Raes from Belgium, made from recycled refrigerators. This way, old discarded consumer products are given a new life and returned to the material cycle. 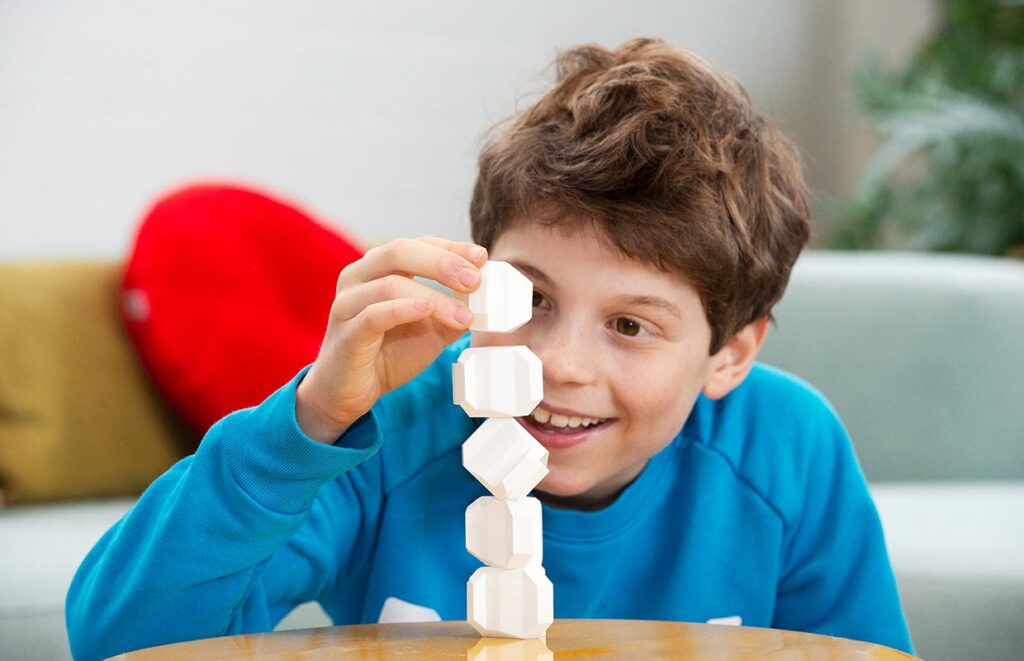 Mathieu Collos, co-founder of the toy startup Clip it from France, goes even one step further. Instead of just recycling the material, it is given a new function; it is “upcycled.” As he himself puts it, “Recycling is incredibly important – but it also has its limits. Upcycling means that we transform certain material without wasting energy. By changing the meaning of an object, we reduce waste and save resources, especially CO2. In the development of Clip it, we wanted to think of the entire manufacturing cycle, not just the toy as a product.”

The construction toy “Clip” consists of old plastic lids that can be collected by the children themselves and from which, with a little creativity, the most diverse works of art can be created. Those who at some point no longer have use for the game may donate their lids to the partner association Bouchons d’Amour among others, and thus actively participate in their charitable activities. 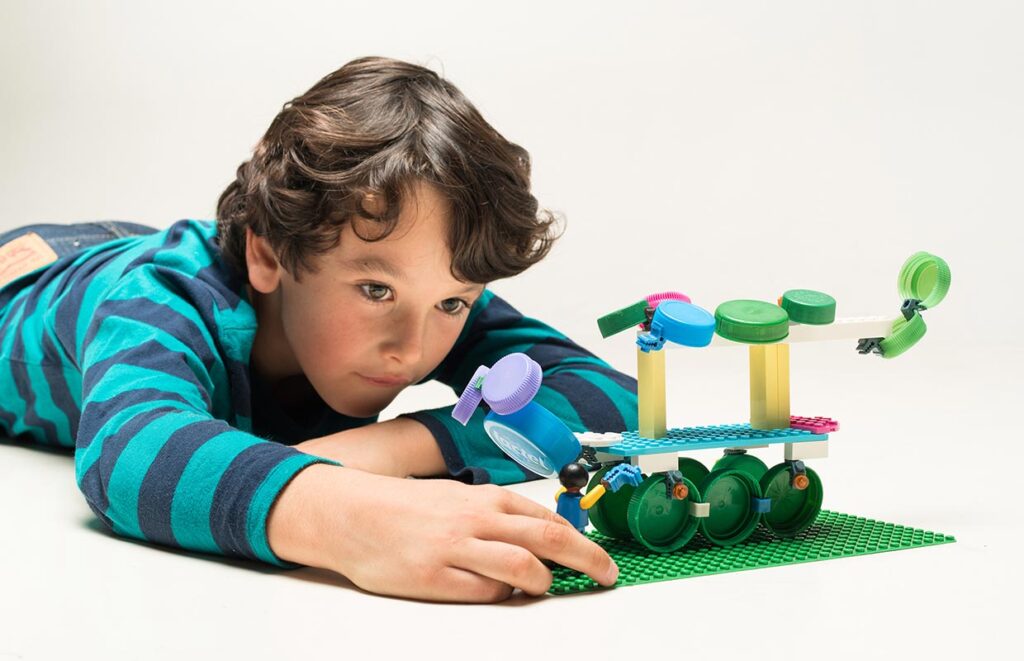 Clip it – construction toy made from recycled plastic bottle tops

A call to action: toys with a message

Another aspect not to be forgotten is that toys help to explain complex issues to children and make them more understandable. A good example is the »Little Sun« by artist Olafur Eliasson and Frederik Ottesen. Developed in 2012 as a solar flashlight for children, they playfully learn how easily sustainable energy can be created and used. In the meantime, the Little Sun has become an inspiration for both children and adults – and hopefully soon also for the toy industry to actively and consciously commit to renewable energies and living conditions of people in the global south. 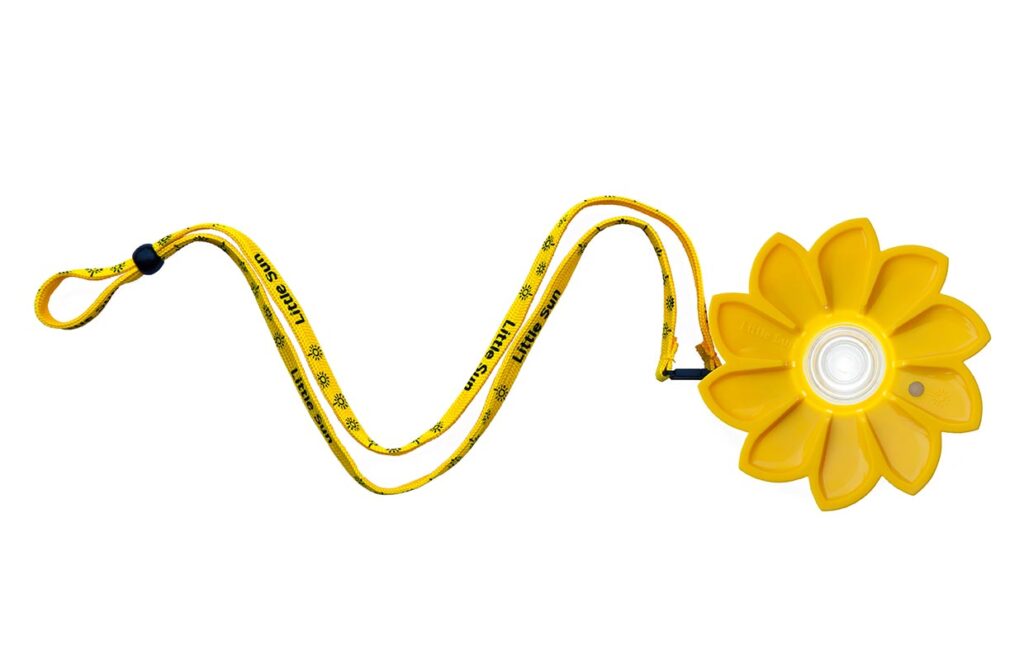 Even the world’s largest toy fair in Nuremberg has proclaimed sustainability as a major goal. Under the motto “Toys for Future” – based on the climate movement “Fridays for Future” – international toy manufacturers showed products in 2020 that are made of natural materials and are intended to make children more ecologically aware. However, one thing is certain for both parents and the toy brands: we only want the best for our children and that is a future worth living on a healthy planet. 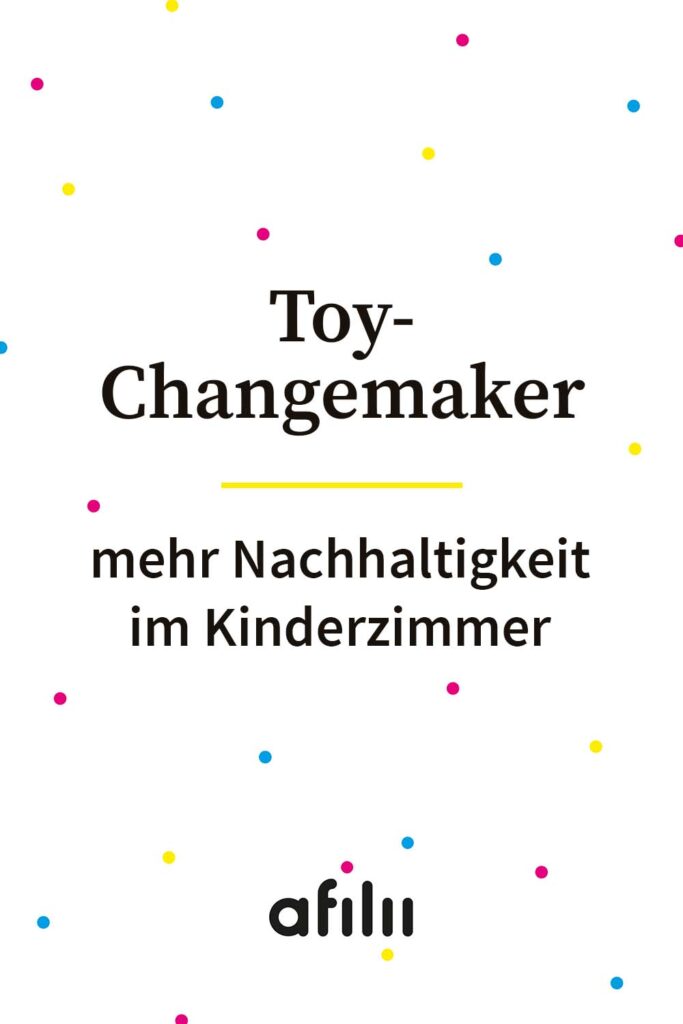